While giving a workshop, “What You Need to Know about Funerals,” FCAEM’s board member and activist, Eva Moseley, shared her story.

When my mother died in 1971, my brother and I were totally ignorant about what to do next. We went to a Jewish funeral home and were shown an array of coffins. I didn’t like the ornate, costly ones — but in a dark corner was a plain pine box… “I want that,” I said, but the undertaker said, “It’s only for the Orthodox.” We were Jewish but secular, so we bought a more expensive box, even though she was to be cremated. The undertaker was being dishonest, but I now know that sort of plain coffin is an option for anyone.

For my generation, cremation was considered the intelligent choice, but I never wanted to be cremated. It uses a lot of energy, generally from fossil fuels, adding to global warming. It pollutes the air. What’s more, with cremation you’re burning up matter that could replenish the soil. 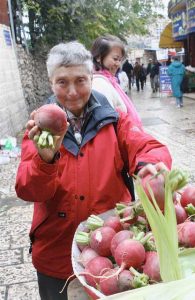 Then there is conventional burial: many funeral homes encourage mourners to buy those expensive caskets I resisted, and many promote viewings with an embalmed body, turning it toxic. Most cemeteries require vaults or grave liners to keep graves from subsiding, to make mowing easier. Some funeral directors may imply that these choices preserve the body, in fact they won’t, or for only a few days. Nor are any of them required by law.

About a dozen years ago I learned that others in the FCAs of Eastern and Western Massachusetts were also interested in simple, natural burial. Together we created Green Burial Massachusetts (GBM) and today I’m on the board of both FCAEM and GBM.

Like nearly everyone else, when friends or relatives die, I find their deaths hard to accept. But the idea of becoming part of the earth again, helping a piece of land to remain or become open space, protected from development and to be enjoyed by hikers, bird-watchers, by my offspring and everyone else’s — that idea makes death a bit easier to accept.